Here We Go Again, or A Fresh Start

About 8 years ago I started working on a game idea where I'd put chess pieces not on a chess board. After showing it to my game dev friend Brandon, he said something that stuck with me for a while, and he doesn't even remember saying: "Cool idea. How about you finish this one?"

Well, he ended up loving the idea, and joined on to help me do just that. It was the best game either of us had ever worked on.  We self-published on http://chesslike.net as it aligned well with my web-development career. The game was made with JQuery and HTML/CSS after all. We released it on Web, Android and iOS. We learned a ton and made a tiny bit of money. We even got some reviews from some medium-sized game review outposts.

One of the most touching moments was when we received an email from a player about their 9-year-old son having a really fun time playing the game, and creating their own levels in the editor. They actually created more levels than any other player! Shoutout to Uriman1111!

Uriman111 levels! That's not even all of them. The dates are wrong, that was a bug, recently fixed. :|

The long-tail on this game has been unbelievable! It was released about 8 years, has no marketing at all, ago and we still get 10-20 new user registrations on the site every month. There are 1300 registered users, who have completed over 10,000 unique levels.

User registrations in the last month via Google Analytics

(A screen shot of my highly sophisticated custom-built analytics dashboard)

There were a few mistakes made, some regrets, and poor decisions, but this is not a post-mortem, this is the rebirth. We've both worked on other projects, and grown in our careers. We're both married now, and I have 3 year old twins. We both still love game development, and still are excited about the possibilities chesslike could have. So we decided to make it again.

Chesslike at its core is a simple idea: chess pieces, not on a chess board. After that, there are also many ideas, so many directions we could go. This game has legs. We want to explore those possibilities. While some things may change from the first game, that core will remain the same. In that sense it feels more like a reboot, or an entry in an anthology more so than a sequel. We've decided to treat the chesslike core like our very own Tetris. This iteration is heavily inspired by roguelikes of the 90s like Fatal Labyrinth and JRPGs and tactical RPGs like Final Fantasy Tactics. Some of the mechanics we want to explore this time around include:

So how is it going?

We've been working on a new version for about a year now. We're still building using web technology (html/js) with the help of the Phaser Game Engine (v3). This is what I am most comfortable developing in, and easily allows us to publish cross platform for any size screen. Not sure how that will work out for a console release, but that should be a good problem to have. We're also planning to migrate some of the database from chesslike.net so OG users can log into the new game with the same credentials.

We will be pitching to publishers this time around, probably starting pretty soon. This game is set to excel with a larger audience and proper marketing.  With funding help, we plan to support the game with new content, features, and updates over the next several years.

We have some big dreams, including competitive play, player ranking, and custom maps. I can't wait for a player to create the equivalent to StarCraft's Big Game Hunters in Chesslike and have the community deem it the de facto map for serious competitive play.

We would also love to explore a console release supporting controller input and a rich offline single player campaign.

Here's a short reel of some of the mechanics listed above that we've already completed, tested, or prototype:

The campaign mode of the new game has an actual story, with a real protagonist. We're really excited to introduce them! 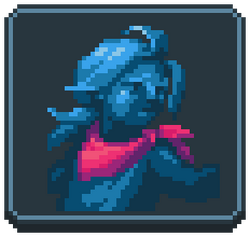 This is Fayette. You'll be joining them on their journey to explore the open world, meet friends of all colors, shapes, and sizes, and to show the kingdoms that "Kings are useless, we don't need them."

Open-world followup to Chesslike: Adventures in Chess. Join Fayette on their journey for justice across the realm.